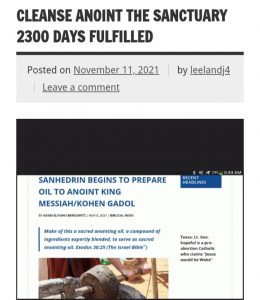 Now what they have done with the oil,  and THE PREPARATION OF THE OIL IS VERY  VERY SIGNIFICANT…..because…….THEY HAVE A DIFFERENT MESSIAH THAN WE DO, but the process is: Messiah means to ANOINT with OIL!! Okay?  AND CHRIST…..CHRISTOS, MEANS: ANOINT!!  Okay?  SO WE HAVE A DIFFERENT MESSIAH, JESUS CHRIST……..YAHUSHA HA’MASHIACH!!
Now, we told you in a post, Palmoniy, 230 Days to RIGHTEOUS SANCTUARY!!  Okay?  Now what happened in here guys, it’s 2,300 Days as you can SEE, TO CLEANSE THE TEMPLE!!!  And you can SEE in Daniel 9, to ANOINT the Kodash Kodashim, THE MOST HOLY!!

(Daniel 8:14) And he said unto me, Unto two thousand and three hundred days; then the sanctuary shall be cleansed.  How do you Cleanse the sanctuary?  WITH OIL…..OR……BLOOD!!
(2:07 min mark)  There you can SEE Palmoniy, he is the ONE that made the statement in Daniel 8:14, okay?  So it was from the Time that the Daily Sacrifice was taken away, to the Abomination that makes Desolate, there will be 1,290 Days!
Okay, so the Host was Given AGAINST the Daily Sacrifice, on April 30, 2018, Netanyahu Declaration of War AGAINST Iran, so we count those 1,290 Days…..and we come to……the 27th Day of the 8th Month, in the Enoch Calendar!  Don’t worry, that’s November 10th, as many as you know!

Now, keep in mind, on the Enoch Calendar, it’s the 27th Day of the 8th Month!  Now the 8th Month in Hebrew can be a……has a couple of names, one is Bul, and one is Cheshvan, and they could of said it, in the article: The Sanhedrin just said:

“The Temple and the Temple service is the benefit all the nations, said Rabbi Weiss!  He said, For that reason, we made the announcement.  ON WHAT??  THE 27TH OF CHESHVAN, THE 8TH MONTH!!!   WHICH IS PRECISELY ON THE ENOCH CALENDAR, THE EXACT DATE WE WERE LOOKING FOR!!
So they said, “CHRISTIANITY IS ESPECIALLY SUSCEPTIBLE TO IMPURITY….IT IS FLOURISHING UNDER IDOLATRY!  CHRISTIANITY MUST ENGAGE…….AND…….JUSTICE WHICH….IS…..THE NOAHIDE LAWS!!!”  Okay?  So they’re DECLARING the Noahide Laws to the Christians, okay?
“But in the end-of-days those who choose to be part of the temple service, WILL SURVIVE (Rabbi Weiss said)!!”  That means: THOSE THAT DON’T PARTICIPATE IN THE NOAHIDE LAWS WILL BE EXECUTED!!! Particularly the Christians, okay??
“We are now”…..these are all his quotes, guys, we will go to the article!  “We are now entering the time of the preparation of the Temple!” THEY’RE ALMOST COMPLETE!!!  “They’re almost complete, says Rabbi Weiss.  Now is the time for the people to act, to show whether they are part of the temple or against the appearance of God’s temple, okay, in Jerusalem!”

So this is our 4th Fulfillment, guys, of Daniel’s Timeline!  It started back in July 25th, 2015, the Baphomet Statue, triggering 790 Days….a countdown until the START OF THE TRIBULATION….WHICH WAS SEPTEMBER 22, 2017, WITH THE REVELATION 12 SIGN OF THE WOMAN CLOTHED WITH THE SUN…….AND AROUND HER SAID, 12 STARS IN HER CROWN!  Okay?

Then we had the Host Given Against Daily Sacrifice, April 30, 2018, when Netanyahu declared War against Iran!  THEN the Prophecy says, From the time of the Daily Sacrifice shall be taken away, and until the Abomination that makes Desolate set up, there shall be 1,290 days (Daniel 12:11)! So precisely from then, we count forward and we come to NOVEMBER 10, 2021! 2,300 days until this sanctuary is cleansed. Alright? And the Sanhedrin prepares the oil of the king!
(5:06 min mark) Okay here we are on Israel 365 News, as you can see!  And let’s look at the article, SANHEDRIN BEGINS TO PREPARE OIL TO ANOINT KING MESSIAH/KOHEN GADOL…..the high priest!  Okay, the sacred oil, the compound ingredients of the anointing oil.
“After exhaustive study the details surrounding the oils to anoint the king, Kohen Gadol, or high priest, and the king’s of Israel, the Sanhedrin is moving forward to prepare enough oil to ANOINT THE MESSIAH, FROM THE HOUSE OF DAVID, WHO WHEN HE RETURNS, HE WILL RULE OVER ISRAEL IN THE MESSIANIC ERA.” Okay?
So the oil is for WHAT???  For the Messiah, you Anoint the Messiah!  Messiah means to ANOINT! Okay, Jesus Christos, Christos means: Anoint, okay?  Yashuah Ha’Mashiach, Mashiach IS Messiah!
(5:55 min mark) “The anointing oil was described in the Bible using in consecration of the tabernacle.” THIS IS WHAT WE’RE SAYING!  After 2,300 days the temple will be cleansed!!  How do you cleanse the Temple?  WITH OIL! Okay?  It’s the Oil! It’s the Anointing Oil, so this is PRECISELY the Date we were LOOKING for, AND the Sign that we are on the Proper Timeline!
Make the oil, okay, compound…”Originally, the oil was used by the priest and the Tabernacle articles, but it was then later extended to include the prophets and kings.”  Okay, so the Lord Jesus Christ is KING AND PRIEST IN THE ORDER OF MELCHIZEDEK!  So, He is BOTH: King/Priest and He is the Temple, okay? So we ANOINT HIM!!
Okay, so you can’t use it for anything else!
(6:44 min mark)  Here’s the ingredients, guys, we have other video’s where we talk about the ingredients and the significance!  “All the ingredients are prepared of total purity. The Sanhedrin has already overseen the production of t ritually pure olive oil suited for use in the Temple Menorah.” Okay?
(6:58 min mark)  And they talk about the process!  It only produces a small amount, okay, and they describe it!  You can read the whole article!  (7:05 min mark) It’s important to know…LISTEN!!!  “It’s important to note that the oil was called in Hebrew, shemen ha-mishchah.”  Okay?  Or….Literally translated as oil…shemen…. of anointing.  The Hebrew word for Messiah, Mashiach, literally is the anointed one.”  The anointed one!
“Through this term is also used in the Bible for anyone who has been anointed.” So you can anoint the priest!  You can anoint the temple! You can anoint the king!  You can anoint the prophet!  Okay??
(7:48 min mark) “Weiss, spokesman of Sanhedrin, announced the beginning of the anointing oil project last week appropriately enough just before the holiday of Hannukah in a sermon he gave on the Temple Mount. Weiss emphasized the Kohen Gadol, the High Priest and Temple vessels will be anointed with theTemple service begins, which does not actually need a Temple, but only the altar.” So they dedicated the altar in 2018!
(8:13 min mark)  “The Temple and the Temple service benefit all nations,” (Rabbi Weiss explained). “For that reason, we made the announcement on the 27th day of Cheshvan.”   Okay, guys this is what we have been SAYING… ….this is November 10th!  Okay, on the Enoch Calendar, the 27th Day of the 8th Month, is November 10th, this is the SAME DAY we’ve been SAYING FOR 6 YEARS….TO WATCH FOR SOMETHING….2,300 Days, okay, TO CLEANSE THE TEMPLE!!  The Temple will be cleansed, alright?
“The day when Noah exited the ark and made a sacrifice to God. At that time, God made a covenant with the entire world, promising never again to bring such a catastrophic flood BUT ALSO REQUIRING THAT MANKIND PERFORM SEVEN NOAHIDE LAWS.”
NOW THE BIBLE DOES NOT SAY THIS!!  THIS IS THEIR EXCUSE TO EXECUTE CHRISTIANS!
“Rabbi Weiss noted that this is also the end of the season for harvesting oils and beginning the preparing the oil.  In order for the Temple service to return, the nation of Israel must begin to observe the laws……In order for the nations to take part in this, they must observe the Seven Noahide Laws.”
This is what it says in Revelation 13, Whoever should not worship the beast should be killed!
“The nations must purify themselves,” Weiss explained.  Alright, this includes the sin, and murder, and abortion, euthanasia, sexual purity.
“CHRISTIANITY” NOW “Christianity is especially susceptible to impurity”….Okay?  By Idolatry!  BECAUSE THEY SAY, JESUS CHRIST IS AN IDOL! Okay?  Because OUR MASHIACH, HAS FORGIVEN OUR SINS… WE ARE THEIR TARGET!
!

“Christianity is susceptible to the Noahide Laws, they must execute them.” (10:01 min mark) “To their credit”, alright?  So they talk about kindness….but…”Today, a person can choose good or evil.  But in the end- of -days, only they must choose to be part of the Temple….IF THEY WILL SURVIVE!” Okay, if you want to live you have to worship at the temple!
And they quote, “Zechariah 14:16, All who survive in the nations will come against Yerushalayim to in the privilege year by the king of the lord of hosts, to observe the feast of Sukkot.” Okay?   So that’s the Lord Jesus Christ reigning in the Millennium, in the Ezekiel Temple, okay?  But they are saying, their messiah is going to do that.
(10:37 min mark)  “We are now entering the time of the preparation of the Temple is almost complete,” ….”Now is the time for people to act, and to show whether they can be part of the Temple.”  Okay, you have a CHOICE!!  You can be part of the temple, or you can, “Stand against the reappearance of God’s house in Jerusalem.” AND BE EXECUTED!!!
To further explain the significance of WHAT JUST HAPPENED, to Anoint the King Messiah, to Cleanse the Sanctuary, okay, we have to go about the counting of Weeks in Daniel, chapter 9!  So in Daniel, chapter 9 says, UNTO MESSIAH…..62 WEEKS, 7 WEEKS, okay? We know those are Years leading to 1,335 Days, leading to Pentecost, okay?
So what happens guys, is you ANOINT THE SANCTUARY IN HEAVEN!  That’s what happened, THE HEAVENLY SANCTUARY IS DEDICATED, CHRIST IS BEING ANOINTED KING AND PRIEST, okay?  THEN IT MANIFESTS IN THE EARTH!!
So  (Daniel 9:24), Seventy weeks are determined to anoint the Most Holy!  Anoint Mashiach, Most Holy,  qodes, qodeshim!  SO THE HOLY OF HOLIES IS IN THE TEMPLE!!  It’s in the Sanctuary, okay?

Daniel 9:25, Know therefore and understand, that from the going forth of the commandment to restore and to build Jerusalem unto the Messiah. Okay?  So the COMMANDMENT IN THE MESSIAH, okay, MESSIAH IS ANOINTED!!  Okay, you anoint with OIL!!

So when we come to Passover this Year, you count 7 Weeks, you come to Pentecost, that’s a WEEK!  Mount Sinai, that’s ANOTHER WEEK!  Then you count another 7 Weeks to come to the 9th of Av!  Okay, this is the counting of the Weeks in Daniel, we have been going over these Prophecies!
Now if you reverse it, and you add the 7 + the 1+ the 7, you add 62 Weeks! And if you reverse it from the 9th of Av, you come to Cleanse the Sanctuary!   PRECISELY, NOVEMBER 10TH!  2,300 Days to Cleanse the Sanctuary when the Sanhedrin begins to prepare to anoint the oil for king Messiah!
I know this is a lot!  We’ll have further video’s to explain this!  This is the Declaration of the 2,300 Days to Cleanse the Sanctuary!  The Prophecy was FULFILLED FOR THE 4TH TIME, okay?  We’ll have more video’s on this guys!
Thanks for watching!  And definitely check out Daniel’s Timeline for more details on the Prophecy!  Thanks for watching, and God bless you! ~ Leeland Jones

When will the Third Temple be Built? When is the Sanctuary Given?:  https://overcominglymedisease.com/when-will-the-third-temple-be-built-when-is-the-sanctuary-given/

Third Temple: https://www.youtube.com/playlist?list=PLXqaGD7sX9gaH78Vf_rs4BS6i8r65i8mB
Blogged: https://overcominglymedisease.com/cleanse-anoint-the-sanctuary-2300-days-fulfilled/
Disclaimer: The information contained on this site is intended for educational purposes only and is not a substitute for advice, diagnosis or treatment by a licensed physician. It is not meant to cover all possible precautions, drug interactions, circumstances or adverse effects. You should seek prompt medical care for any health issues and consult your doctor before using alternative medicine or making a change to your regimen.
Jennifer HeathCLEANSE ANOINT THE SANCTUARY 2300 DAYS FULFILLED11.11.2021