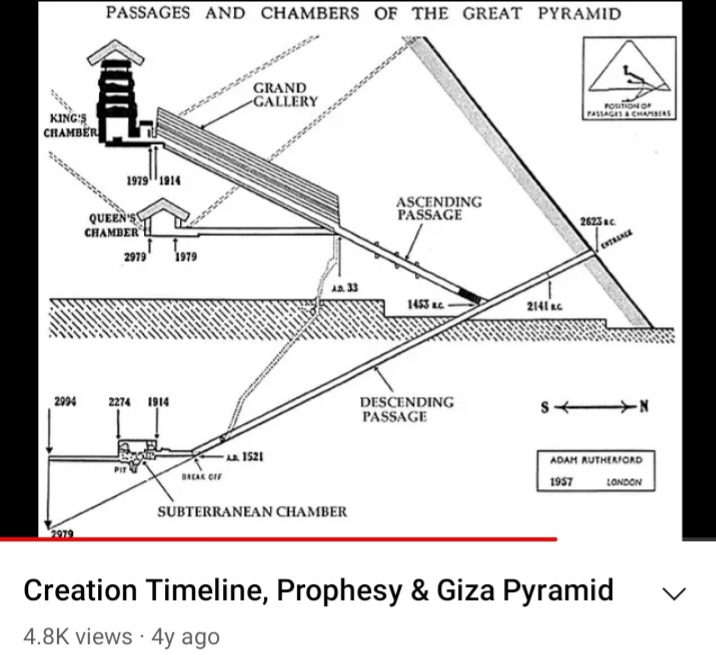 (.39 second mark) This year (2017) from Adam is 6106. I’m going to go over with you the significant years from this prophecy.  I encourage you to watch Cyrus Decree. {The Cyrus Decree and Scroll: https://www.youtube.com/watch?v=NexWmOAnww0 }

We just had Trump announce the U.S. Embassy moving, this came the day after Cyrus Decree!  Amazing, fulfilling perfectly!  I strongly encourage you to get the ENOCH Calendar, it’s the right calendar. {Enoch Calendar: https://storage.googleapis.com/wzukusers/user-26016223/documents/ccf5bd79447b453889507dd1998815d7/Enoch%20Calender%202022%20for%20Leeland.pdf

I am doing this on the 2nd or 3rd day of Hanukkah, which is Dedication!  So we’re rebuilding the Temple!  One of the ways that you rebuild a Temple, is find historically, prophetically, the Timetable that happened in the past, which will tell us what will happen in the future. 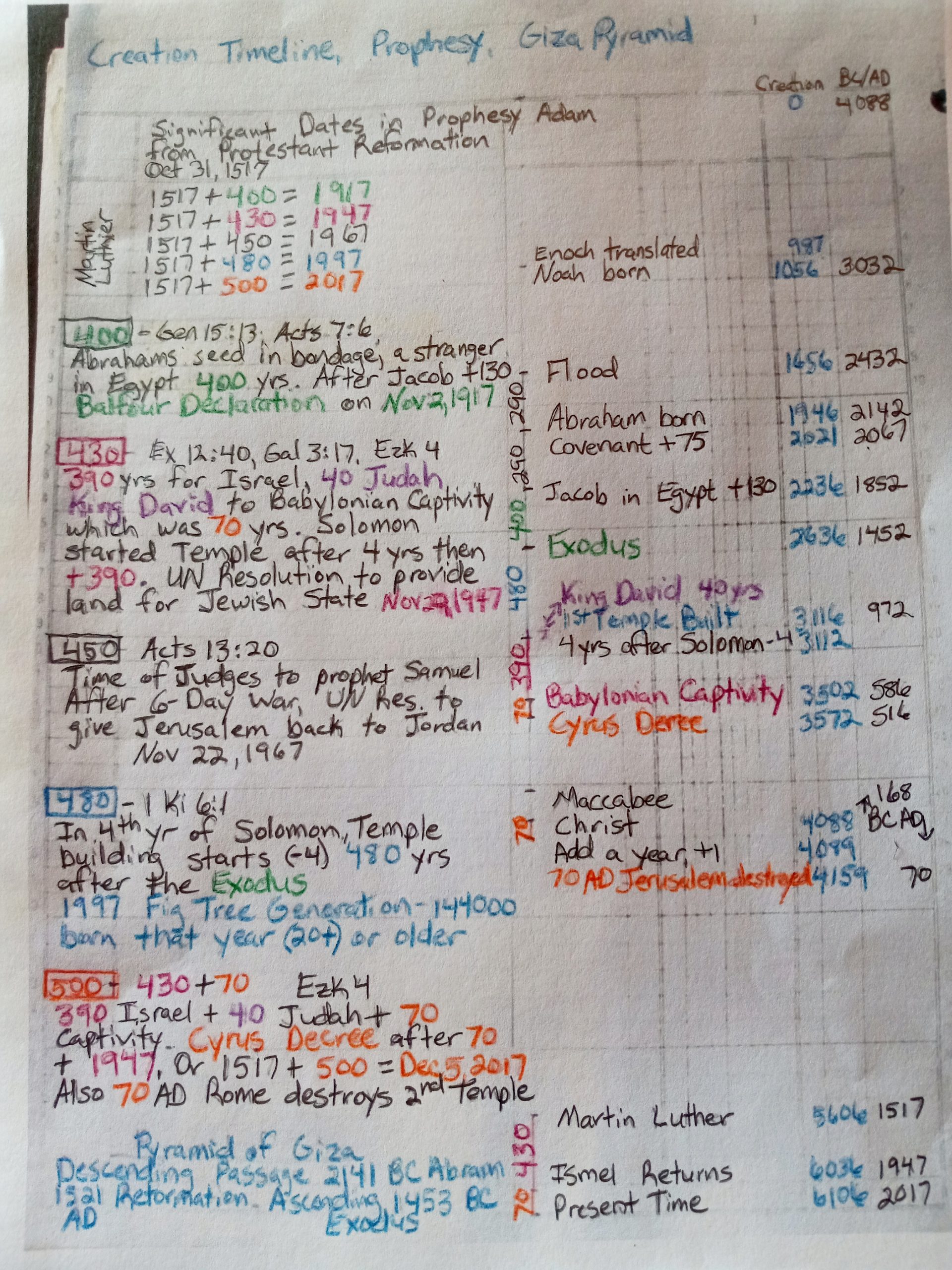 Now, for most of you watching this, one of the things that you’re probably curious about, which I have in the title, is the Pyramid of Giza. The Pyramid Giza has some Passages.  The Descending Passages has these dates, 2141 B.C., this is actually Abraham’s year of birth. It also has on the Descending Passage 1521 A.D., this is Reformation.  Then there’s an Ascending Passage, which has year 1453 B.C., which is the Exodos.

(4:42 min mark) I’m using this as Confirmation to the Timetable I’m giving you, okay?

2nd page is Adam to Noah; 3rd page is Noah to Abraham; and 4th page has Abraham, Isaac and Jacob)

(5:30 min mark)  There are years that are marked out, and then in the Scriptures, there’s years that determine, how we can calculate the present time.

(7:15 min mark) Then what you do is you turn to Abraham to Isaac to Jacob, and then Jacob goes into Egypt when he is 130 years old. This is our critical date!  Because from that, God’s covenant with Abraham (Genesis 15:18),

Genesis 15:13 And he said unto Abram, Know of a surety that your seed shall be a stranger in a land that is not theirs, and shall serve them; and they shall afflict them four hundred years; 14 And also that nation, whom they shall serve, will I judge: and afterward shall they come out with great substance.

(7:38 min mark) So, once you know the YEAR Jacob went into Egypt, you count 400 years, that brings you to the Exodus, okay?  Once you have the Exodus, then you know that Solomon’s Temple is 480 years from the Exodus!  Now, what happened is Solomon reigned 4 years (1 Kings 6:1), and in the 4th year he started to build a Temple. You count 480 years, then you subtract 4 years, okay?

And he says, the 40 days are for Judah, and these are the 40 years.  The 390 days are for Israel, for 390 years. Now king David reigned 40 years, so that relates to king David.  So, you don’t count those 40 years, but then you count the 390 years. Because what happened, is when Solomon went Apostate, God divided the Kingdom into the 10 Northern Tribes: Israel.  And the Judah (Benjamin).

Now we’re gonna see the significance, sometimes what you do, is you add the 390 and the 40, which is 430.  (9:19 min mark) You can see that here, this is also referenced in Exodus 12:20 and Galatians 3:17.  BUT, the Key to this whole thing that I’m showing you is these 390 years.  You count that from when Solomon built the Temple, brings you to Babylonian captivity!  Once you know that, you got 586 B.C., which we know in the historical record: BAM, now we have all the B.C/A.D. correct years! Okay?

So, we saw the 400 years, we saw the 430 years, but now what we do, is if you add those years, and we start at the Protestant Reformation.  Again, the Protestant Reformation is when Martin Luther put The Ninety-five Theses on the board of the Catholic Church right, we even saw that year in the Giza Pyramid 1521 (In January1521, Pope Leo X excommunicated Luther), but we have the accurate date of 1517.  Now if we add those years 1517, we come to significant dates!

Please watch the other videos.  Trump is actually doing this, when he changed the U.S. Embassy, it’s now going to CHANGE everything in Jerusalem, for them to build a temple.  So, we got Cyrus Decree on December 5th, 2017. On December 6th was Trump changing the U.S. Embassy.  It is also, as we mentioned, 70 A.D. Rome destroyed the Second Temple!  So this is why 70 years!

Now the interesting thing about this number is if you look up the Strong’s Concordance in Hebrew, this number means bone, or it means, and the King James uses this word self same, or same day. Now, if you look up this word, actually all of these critical people and dates come up.  You have Adam; you have Noah; you have the Flood; you have Abraham being born; you have Jacob; you have the Exodus; you have King David; the First Temple isn’t there, but you have the Babylonian captivity and Nebuchadnezzar, ALL these Events are related to either the word bone or self same day!  Amazing!

So to me that’s just confirmation that all of this is accurate. It is in fact the year 6106, okay?  We see that through the Giza Pyramid, and we have all of these critical years!  We’re living in a SCHEDULE!  This thing is a Schedule, it’s a Timetable!  We go from the Protestant Reformation when Martin Luther went against Mystery Babylon, and he said, You guys are the Antichrist man, you are Wicked!

(17:09 min mark) So, thanks for watching!  Watch and pray that you may be counted worthy to escape all these things, in Yeshua’s (Yahusha) name, amen. ~ Leeland Jones

“Why Was It Built?

It is logical to conclude from the evidence presented that the Great Pyramid of Giza was built under Divine Inspiration.  This fact in itself proves that God, in His infinite wisdom, thought it necessary for our instruction.  It is now up to man to make use of the knowledge it contains.

We have the suggestion in Isaiah 19:19-20 that the Pyramid is a witness.  One might ask, “We have the Bible, does God need another witness?”  The answer “yes” would be consistent with the Bible; that the evidence of “two witnesses” shall establish a matter.  Also the need for a second witness is shown by the fact that we have had the evidence of the Bible all through the ages, which, for those who can believe it, is God’s infallible Word.  But, our belief in this fundamental fact has not been very strong.  The critic and the modernist have not found it difficult to undermine the faith of the great masses, of our time, in the reliability of the Bible record.

An analysis of the Great Pyramid suggests the following answers to the question; why was it built?

First, to convey new proof to men in the present age, in spite of, and yet by means of, modern science, as to the existence of the personal God of Scripture.  We live in a skeptical as well as in a scientific age.  In religion and in science mankind embraces rationalism and unfaith.  Humanity has become boastful of its intellectual power, and proudly aiming to be “as “god,” it has become thoroughly materialistic.  God seemingly anticipated that this age would lapse into agnosticism and prepared for it.  This stone witness was designed to corroborate His Revelation.  That the Pyramid was designed for this age is evide3nt by the fact that its revelation did not come to light centuries ago.

Second, to reaffirm the prophecies of the Old Testament Scriptures which teach that of the seed of the woman, without the man, a Divine Savior and Redeemer was to arise and appear among men.  That was an actual historical event and took place at a definite preordained date.

Third, to proclaim Jesus Christ as the Savior of man.  “Did you never read in the Scriptures, The Stone which the builders rejected, the same is become the head of the corner: this is the Lord’s doing, and it is marvelous in our eyes” (Matthew 21:42).  “Jesus Christ Himself being the chief corner stone; in whom all the building fitly framed together unto an holy temple in the Lord: in whom ye also are builded together for an habitation of God through the Spirit” (Ephesians 2:20-22).  Christ is referred to in these passages as the “Chief Corner Stone.”  He is the Stone which the builders rejected, and is yet to become “the head of the corner,” that is the head of that pyramid [meaning the capstone, or top, of the pyramid] representing His Kingdom here upon earth, which kingdom is now imminent.

Fourth, to give added evidence of His second coming, when He shall descend as the Lord from Heaven, with the view of reigning over all mankind, in one all just, beneficent omnipotent rule.  This reign likewise is shown to be historical and to commence on a definite prearranged date.

“The stone which the builders rejected, the same is become the head of the corner.  This is the LORD’s doing, it is marvelous in our eyes.”

Commentary: It is interesting to note that some Bible scholars believe that the Psalms prophetically correspond to the years beginning at 1900.  If that happens to be true, then Psalms 118 corresponds to the year 2018.  Interesting in any case.]

Jeremiah 32: 18-29 states that God—
Hast set signs and wonders in the land of Egypt, even unto this day.”

God’s Stone Witness, The Great Pyramid designed by the Divine Architect in the dim past, today stands decoded.  Within its structure lie the architectural drawings of God’s great plan for our Planet.  Now, at the time appointed, it witnesses and proclaims the now imminent Divine judgments and the glory to follow.

The Great Pyramid, the first and greatest of the Seven Wonders of the Ancient World, is still the greatest Wonder of the World.” http://www.prophecyanalysis.org/decodingpyramid.htm#capstone

WHY THE “SON OF PERDITION” IS A PRESIDENT OF THE USA, A STUDY OF DANIEL 8 AND REVELATION 17: https://overcominglymedisease.com/why-the-son-of-perdition-is-a-president-of-the-usa/

Mystery of Beasts in Isaiah 11 and Revelation 13: https://overcominglymedisease.com/mystery-of-beasts-in-isaiah-11-and-revelation-13/

When will the Third Temple be Built? When is the Sanctuary Given?: https://overcominglymedisease.com/when-will-the-third-temple-be-built-when-is-the-sanctuary-given/

5 Biblical Proofs we are in the 7 Year Tribulation: https://overcominglymedisease.com/5-biblical-proofs-we-are-in-the-7-year-tribulation/

Decoding the Pyramid of Giza: http://www.prophecyanalysis.org/decodingpyramid.htm#capstone