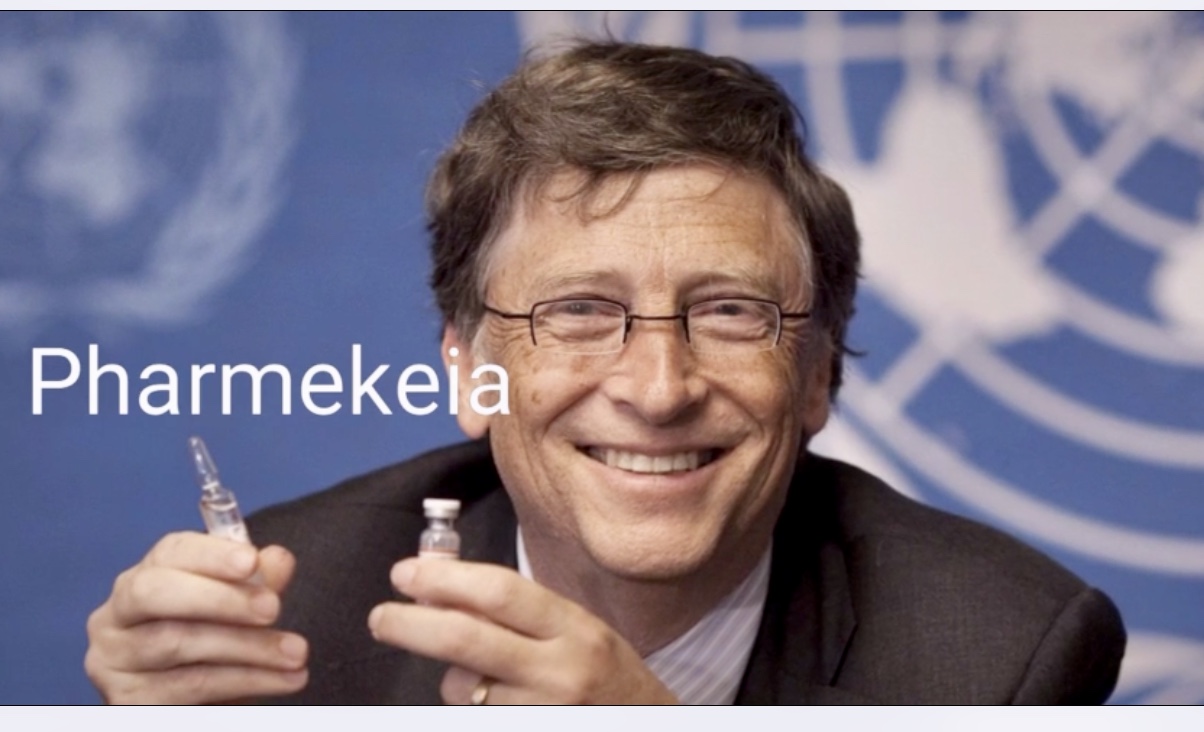 THIS IS THE FINAL WARNING TO THE PEOPLE BEFORE I LEAVE, THAT YES,  PHARMAKEIA IS THE MARK OF THE BEAST!  And, in this video, you will see that it is the Golden Cup in Mystery Babylon, the Great Whore and it’s in her hand, the cup of the Abominations of the earth!  Now, there you can see the symbol of the Golden Cup, and the Pharmaceutical Industry is a cup!  Okay, and in the Cup is a Mixture!

Now, what we are suggesting, is that mixture is Pharmakeia!  So, in the Greek where we get the word for Pharmacy in English, which means medications, the use and ADMINISTRATION  of drugs, it’s POISONING!  And it is used in Magic, Sorcery, and Witchcraft, of course by Mystery Babylon!  So, when we say Pharmekiea in this video, what we are talking about is what you see on the screen, when we say Pharmekeia, it means that:

Why is there a SERPENT wrapped around a Cup, or a SERPENT wrapped around a Pole?  Because the WHOLE Health Care Industry is Beast Worship!  Taking Drugs, is Beast Worship!  Okay, so when we see Mystery Babylon…Revelation 17:4 and I saw the woman (great whore) sit upon a scarlet coloured beast. And the woman was arrayed in purple and scarlet colour, and decked with gold and precious stones and pearls.  Okay, this you see in Revelation 14, this is Mystery Babylon!

And as it continues, she having a Golden Cup, in her hand, full of the abominations and  filthiness of her fornications!  Remember that!  She had a Golden Cup FULL OF ABOMINATIONS AND FILTHINESS!  Okay, what are abominations and filthiness?  Okay, that is what we are talking about, Pharmakeia, okay?  And upon her forehead was a name MYSTERY, BABYLON THE GREAT, THE MOTHER OF HARLOTS AND ABOMINATIONS OF THE EARTH (Revelation 17:5).  On her Forehead!

It is a MIXTURE!  Okay, in Greek, “kerannymi”, okay?  And so this mixture in Greek we see in Revelation 18:6, and in the Cup which she MIXED, or she MINGLED,  this is WITCHCRAFT, this is SORCERY!  This is the Mark of the Beast, guys!  It’s not something else, this is it, this is the Implemented System!

Now, it is very important for you to understand that the Mark of the Beast, okay, is a SEED WAR!  It’s a War against the Woman’s Seed and the serpent seed!  This goes all the way back to the Garden of Eden, and the Commandment in Genesis chapter 3, when the Woman Seed and the serpent seed would be at odds! That’s what the Mark of the Beast is, it is a SEED WAR!

Genesis 3:15 And I will put enmity between you (serpent) and the woman and between your seed. Okay,  IT IS A SEED WAR!   So what the SERPENT HAS TO DO IS CHANGE THE SEED!  And the Pharmakeia will change the Seed (DNA)!  The Woman’s Seed, that orginal image and likeness of God, will be CHANGED INTO THE SERPENT SEED!  Just like in Genesis chapter 6 and the Nephilim! So the Pharmakeia will change the DNA of the people, TO BE CONTROLLED BY THE BEAST!  Okay, because they are DECEIVED!

They are DECEIVED by the MERCHANTS, remember the merchants…we will get into them later…. the great men of the earth;  by the pharmakeia were the nations deceived  (Rev. 18:23).  Okay?  Soo we read the Bible in this channel and the Bible is being FULFILLED perfectly!!

Now, I know you guys DON’T STUDY YOUR BIBLE, you just sit and watch video’s on Youtube! You pick up your Bible and YOU THINK YOU UNDERSTAND THE BOOK OF REVELATION!  But don’t you THINK you should look into things that are stated in this video?? Don’t you think you can Research and look into it, and see if these things aren’t so, before making comments and being IGNORANT of the Times that you are in?

Okay, guys, look at these verses!  Look at WHAT we are discussing!  This is very important!  Don’t you thing it is important to UNDERSTAND the Mark of the Beast? DON’T YOU THINK YOU SHOULD UNDERSTAND THE DECISION THAT WILL DETERMINE YOUR ETERNITY?  This is the Time that you are in!  This is the End of Days!  So, REPENT,  the Kingdom is at hand!

Now, when we come to the Mark of the Beast and this Golden Cup, WE HAVE TO SEE THIS IN THE BIBLE!  In Daniel!  In Revelation!  Okay? So, Revelation we saw Mystery Babylon, now we also must SEE the Mark of the Beast in Daniel, and we see it!  The toes of the feet were part iron, part clay….43 they mingled themselves with the seed of men.

So, we must  ASK OURSELVES, who is Myster Babylon anyway??  Guys, on THIS channel WE DON’T GIVE OPINIONS, WE DON’T LISTEN TO OPINIONS, WE LOOK AT WHAT THE SCRIPTURE SAY, LET THEM INTERPRET THEMSELVES!  So, Mysterly Babylon, herself, is in Isaiah 47:1 O virgin daughter of Babyon, sit on the ground: there is no throne, O daugter of the Chaldeans: 5 for you shall no more be called The lady of kingdoms.  So this is Mystery Babylon in Isaiah 47, she is else where, but here we can see her. 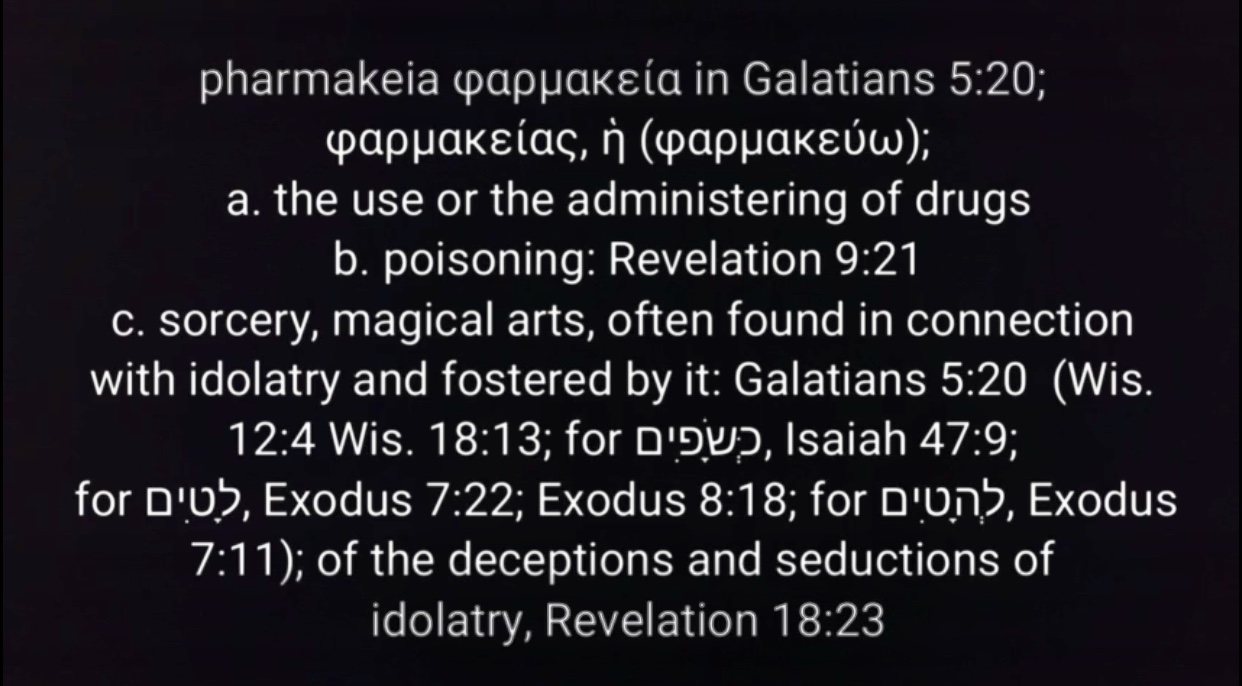 It is used in EXODUS, with the Wise Men around Pharoh!  And, it is used here in Isaiah!  Okay, so Mystery Babylon USES THE SAME PHARMAKEIA IN REVELATION, and we can see right here, in Isaiah 47, SHE DOES THE SAME THING!

(Isaiah 47:12) Stand now with your enchantments, in the mulititude of your pharmakeia. 15 Thus shall they  labour, even as they Merchants! So Mystery Babylon is ALWAYS associated with her MERCHANTS!  Okay, as a prostitute she always has to have clients, and YES THE WHOLE WORLD IS DECEIVED!  Okay, it is part of her “Clientel”!  Okay?  And the merchants were the great men of the earth; and by your PHARMAKEIA were the nations deceived (Rev 18:23)!

Okay, THE NATIONS ARE Deceived!  Now we also see her in Nahum chapter 3:4 And the multitude of your whoredoms of the wellfavoured harlot, the mistress of witchcrafts, that selleth nations through her whoredoms, and families through her witchcrafts, kesep!  Okay?  So here you see Mystery Babylon, she is also associated with the Locusts!  (verse 15)…many are the Locusts, 16 You have multipilied your Merchants above the stars of heaven: the cankerworm spoileth, and flieth away. 17  and the  Crown, as the locusts!  We will get into that in another video, explain the locusts and their importance, okay?

But here, you can see again, the merchants, the great men of the earth,  by your sorcery, the  Pharmakeia, were the people deceived (Revelation 18:23)!  Because IT IS THE MARK OF THE BEAST! 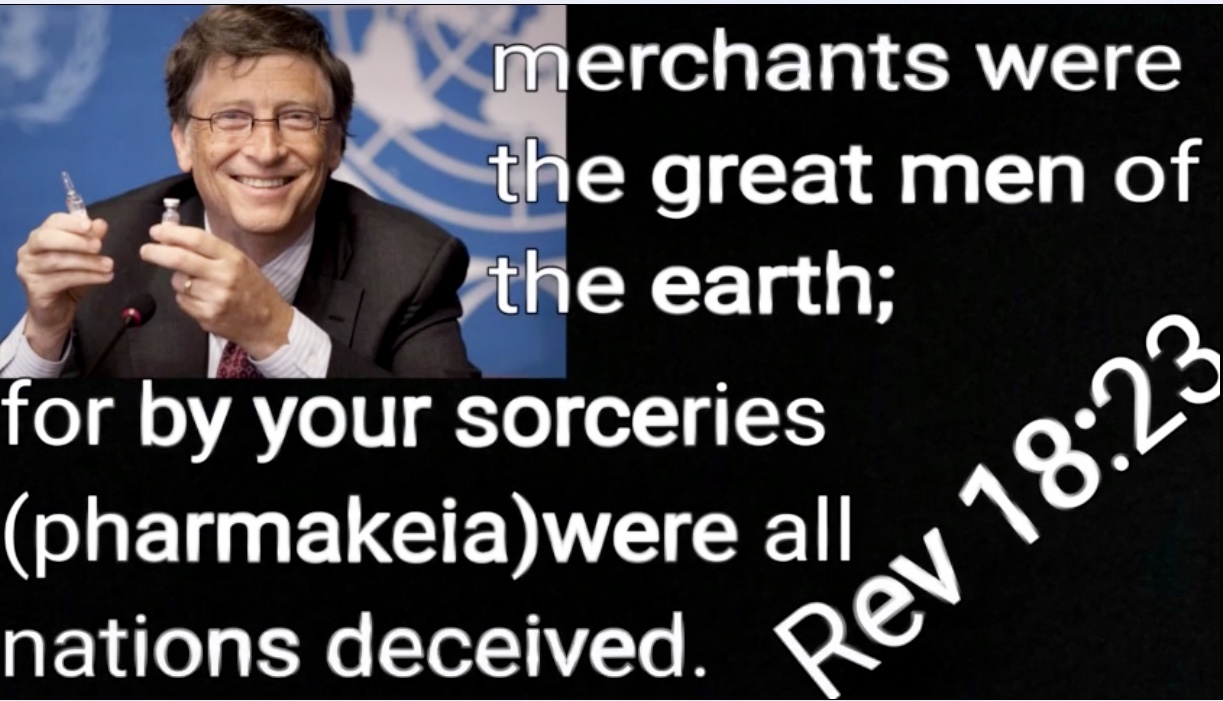 Okay, so Mystery Babylon, (Rev 17:4) having a golden cup in her hand full of abominatins in filthiness of her fornication.  So in her cup, is the Abomination mixture of pharmakeia!  And in the Greek, it is this mixture which she has mingled her cup!  Mixed this cup and mingled the serpents seed with the Woman Seed!  Okay?  That is what is happening with the Pharmakeia!  With the toes that were part iron and part clay, they will mingle themselves with the seed of men ( 43)!

Okay, now there are terrible things that are in it like Nanobots, okay?  OTHER THINGS THAT WILL CONNECT PEOPLE TO BASICALLY BE ZOMBIES, DROIDS, PART OF THE BEAST SYSTEM! Through the Pharmakeia! Through the Golden Cup!  So this IS  the Mark of the Beast!  This is part of the Beast System…Implemented OVER THE WHOLE WORLD!  And you can see the Health Care Industry participating!  Everyone thinking it is a FLU SHOT, when it’s the Mark of the Beast! 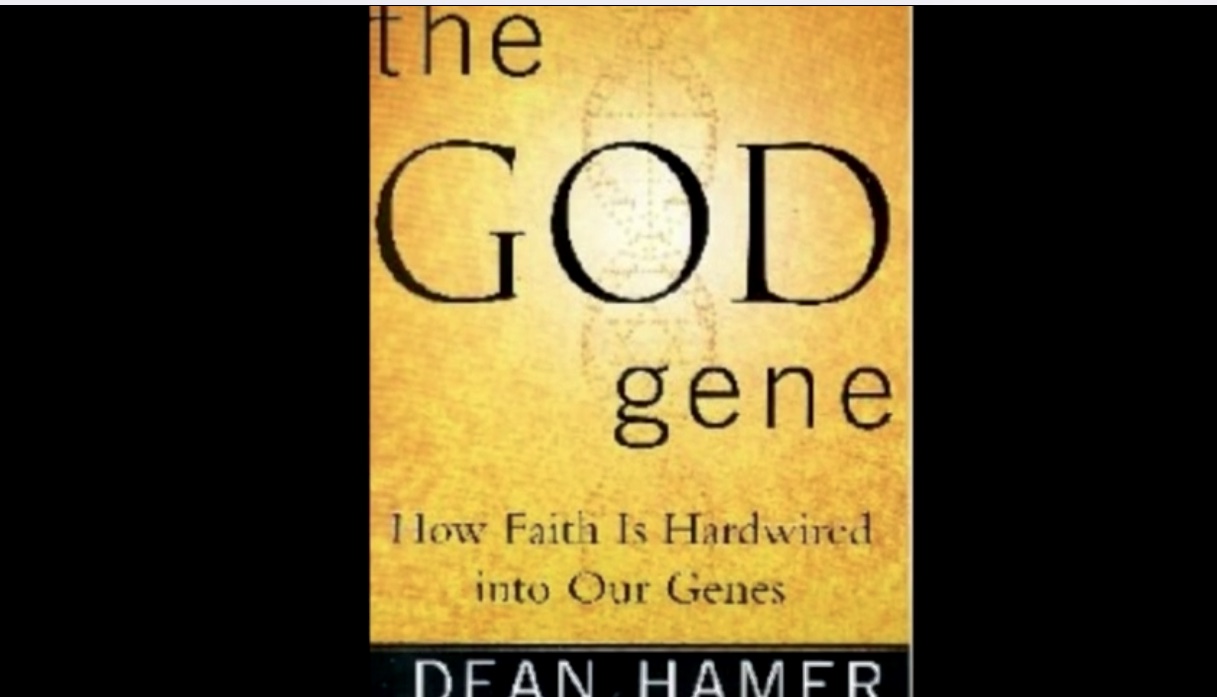 So, you guys, we have LOTS of INFORMATION like this, like this is Vaccinating Spirituality, IT WILL ILLIMINATE YOUR CONNECTION WITH GOD  and NOT be  recognized, just like the Nephillim!  There is an actual GOD Gene that this targets, in the people!  We have lots of video’s to explain that….the VMAT2 Gene!  Okay, and this is the WAR AGAINST THE SAINTS, okay?  This is the War… This Virus…This Government Program, is TARGETING A SPECIFIC GOD GENE IN THE PEOPLE, THEIR CONNECTION TO GOD!

Now, this is also other things, like Luciferase!  Some people say, well is it on the hand, is it on the forehead?  It is not the Mark of the Beast….!  IT’S AN IMPLIMENTING SYSTEM THAT IS COMING! Okay, there is a thing called Luciferase, which is a Quantum Tattoo…Dot Tattoo, that may be coming! Okay, which may be something on the hand and/or the forehead, where it places something insided the skin!  Which is both the  Pharmakeia and allows it to be READ BY SCANNERS and other things!

Okay, so the  ‘IMPLIMENTATION’  NOW is the Green Passport, but other things are coming down the pipe, WHERE THIS IS THE FULL MARK OF THE BEAST! Okay? The full rollout is Coming! The main thing is to change the DNA of the people with the Pharmakeia…with the LOCUSTS!  Okay, we will do another video to explain futher, the Locusts!  Now you say, Well…..but, what a about this, what about that?

But, while this is happening in the Pharmakeia, (Rev 9:20) the rest of the men which were not killed by these plagues (the Locusts plagues),  they repented not of the works…that they should not worship DEVILS…neither did they Repent of their Pharmakeia!  So PEOPLE WILL NOT REPENT, okay? (Revelation 12:17) And…the dragon was angry with the woman, and made WAR with her SEED!

Okay, so this is HOW WE OVERCOME!  BY KEEPING THE COMMANDMENTS of GOD!  Okay?  Identifying the War!  INDENTIFYING WHAT IS HAPPENING IN THE WORLD AROUND YOU!  Okay, this is the Mark of the Beast!  This is the End of Days!  This is the Golden Cup in the Harlot’s Hand!

The Gold Cup of Pharmakeia: https://overcominglymedisease.com/golden-cup-of-pharmakeia/

Jennifer is a true believer of Zig Ziglar’s quote, "You can have everything in life you want, if you will just help other people get what they want." Jennifer also has been on her health journey for the past 30+ years. She has been the patient of, and has worked with, some of the most top holistic doctors and healers of our time. After recently healing her body from the damage of Lyme disease, Jennifer has made it her passion to educate the public on Lyme and give them tools and resources so they too can get better. Jennifer is one of many caring administrators on the Facebook Group called, Lyme disease and Co-infections. Jennifer has been coaching and inspiring Lyme patients all over the world thru her blog and the Facebook group, to find caring doctors that will help them. Jennifer shares the knowledge she has gained thru her team of holistic doctors and from trial and error. She teaches daily and inexpensive techniques to detoxify and nourish the body from home, along with ways to limit our toxic exposure to things we eat and use daily. Because Lyme disease is like Cancer and Aids, and is not being recognized by the medical community, Jennifer has decided to share her story and the successful treatments she has used to restore her health and to stay well, in this toxic world. Check out her recently released book 'Overcoming Lyme DIsease' and the accompanying free workbook available on this site.