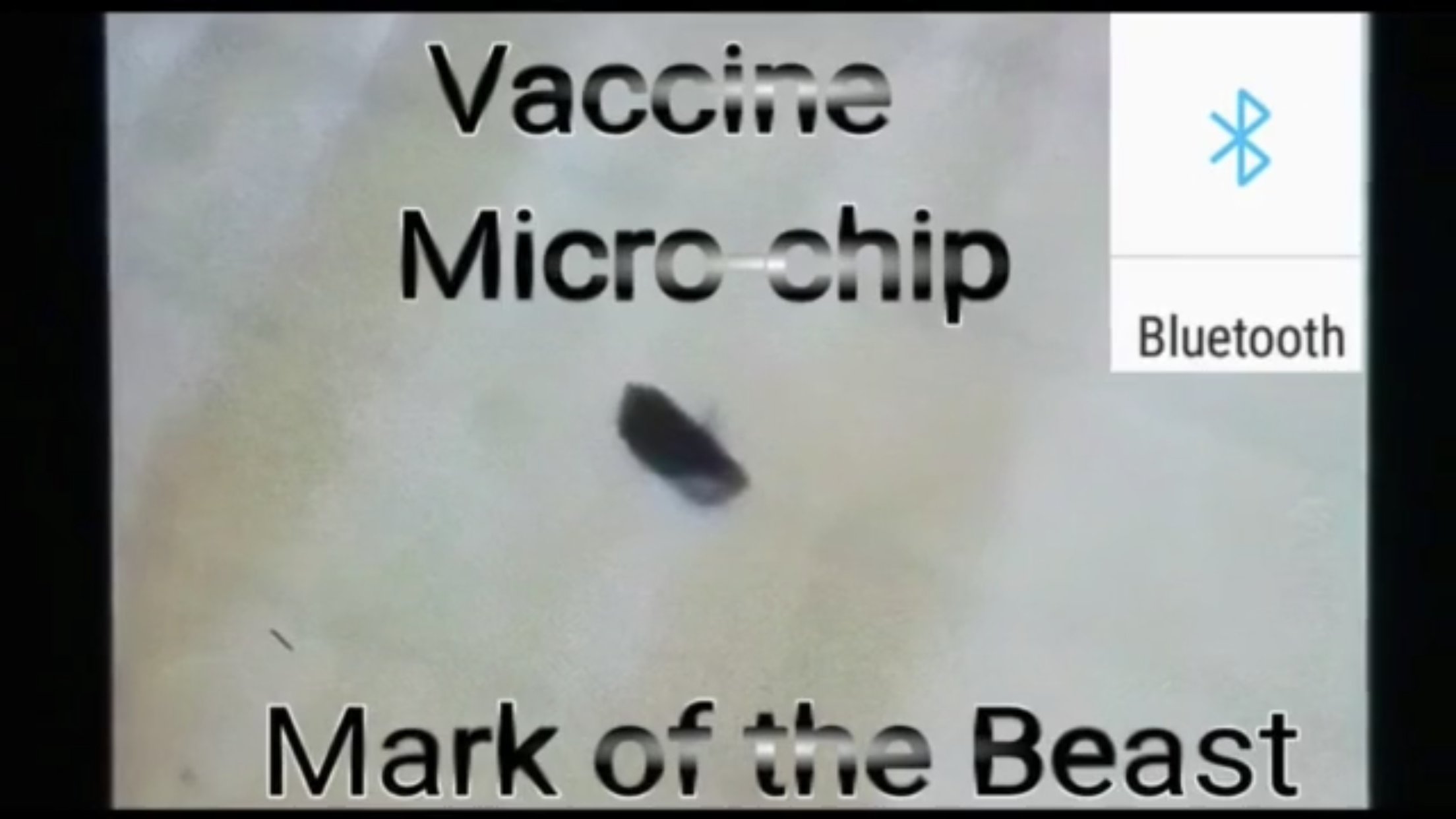 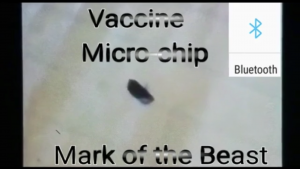 YES, THE VACCINE IS A MICROCHIP!  And WE ARE MAKING IT CLEAR TO PEOPLE: THAT THIS IS THE MARK OF THE BEAST!  Okay?  The vaccine is the Mark of the Beast!  IT IS NOT A VACCINE AT ALL, IT’S AN IMPLANTABLE MICROCHIP, we had showed you in the previous video, reading the QR Codes!  In this video WE ARE GOING TO TALK ABOUT IT’S BLUETOOTH CAPACITIES, Okay?

Now, in Greek the word for Sorcery, in Revelation, is Pharmakeia, where we get Pharmacy.  So the Book of Revelation talks about Pharmakeia, and it’s the Mark of the Beast!  So previous we showed you, the QR Codes!  So people were able to get readings by a QR Code reader on people’s arms, at their vaccination site, and they were able to get the QR Code to come up on the screen for the device to read it.

Okay, now in this video, we are going to talk about Bluetooth, okay?  So WE ARE BEING CONDITIONED FOR QR CODES, WITH ALL THE VACCINE PASSPORTS AND THE QR CODES, all the time, all the time, it’s a SOCIAL CONDITIONING THAT IS GOING ON WITH THE VACCINE ID PASSPORTS, IT’S BLOCK CHAIN ENABLED IN QR CODES, okay?  But we want to offer a possible explanation of what is coming up on the Bluetooth enable devices that is an IP address, okay? 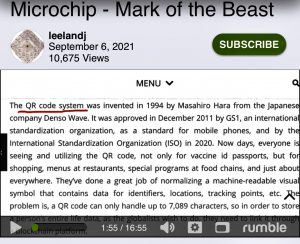 So, you can see we are being conditioned for the QR Code, and the QR Code System, with the Passports, and everything else, it’s going to be fully implemented, but the Internet Protocol for Version 4,  IPV4, their was’nt enough capacity!  So there is a new capacity in IPV6, okay?  TO CONDITION EVERY SINGLE HUMAN, and every human of Barcode and Microchipping them, okay?  So NOW it’s POSSIBLE, alright? This could be it,  I am not an expert on this, but you can look into it yourself, this is IPV4 (or IPV6?) and that is that is possibly coming up on the barcodes, not on the barcode, but on THE READERS OF PEOPLE’S BLUETOOTH WHEN THEY PICK UP THE ‘VACCINATED’ AROUND THEM, okay? 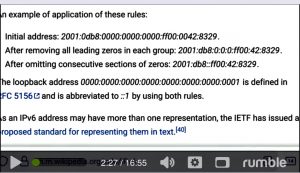 So that’s what you are going to see in this video, we are right here guys, I apologies that it’s in all these different languages, guys, it’s not in English, this is just what I could download from Bitchute to show you what’ s going on.

Vaxxed: I was not feeling so good on Thursday, I had to take a day off.

Vaxxed: Yea, it’s not…… It didn’t  hurt, but I got a fever and chills and stuff, I wasn’t feeling to good.

None Vaxxed: No way!  ( he touches the arm of the vaxxed) Is it sore?

None Vaxxed: What do you mean?

None Vaxxed: How do you know they are trying to connect with you?

Vaxxed: I can say…. castle?

None Vaxxe: What happens when you try to connect to it?

Vaxxed: I am good, how are you?

None Vaxxed: I am good!  It’s not me that they are asking about, It’s you!  Are you feeling okay, what about the connectivity, how is that…?

Vaxxed: The connectivity is still there man, I don’t know how to turn it off.

Vaxxed: Yea!  Check this out!  See that TV over there?

Vaxxed: Okay, If  I walk up to it, it is going to try to connect with me.  Watch this!

Vaxxed: There it is (Connecting to AstraZeneca…..)!

Vaxxed:  Yup, Everywhere I get the same message!  I walk away..

None Vaxxed: Oh my G..!  And you don’t feel any vibrations in your body? Nothing?

Vaxxed: Nothing!  All good!

Next is an explanation of how the graphed oxide generates connectivity

(Next video 5:24 min mark) Monica Caicedo: The chip is that real or a lie?

Chinda Brandolino: It’s a nanoprocessor.  I say again that it is in plain view for those who want to see the micrographs of the electron microscope study made by Kaicker.  It is clearly seen, in the magnification, a small, perfect, quadrangular, precise-edged, metallic corpuscle, which is the same as any nanoprocessor in nanotechnology-reponsive devices.  That nanoprocessor is driven from a 4G Plus or 5G antenna. That is, all G technology is the same.

The difference lies in that the packet of information that an antenna can transmit is much larger in the 4G Plus and 5G, 6G, and 7G. That is, all that compact information is handled by a nanoprocessor–in a device –which will be just inside our cells.  By having Morgellons in the polyethylene glycol, they’re self reproducing.  That is to say, it’s self-replicating.  But BECAUSE IT’S IN GRAPHENE…..GRAPHENE IS A CATALYST AND, as I explained to you,  MAKE THE CELL RESONATE WITH 5G ANTENNA AND THE MICROWAVES OF HUMAN THOUGHT.  CAN YOU UNDERSTAND THAT?

THERE’S A NANOPROCESSOR DRIVEN BY A 5G ANTENNA THAT GOES DIRECTLY TO THE WORKING OF OUR BRAIN.  On the other hand, I have seen that microchips are being inoculated in the northern hemisphere, in one of the hands or many business leaders.  That would be ANNEXED INFORMATION, it would seem to be that this chip would be used.  I have seen a lot of signed documents about how managers, high ranking employees of companies use it as an identification card to open the door of the bank, etc. In it, they would have their medical history as well.  That’s to say, all the summary data will be in that microchip, which is already a fact.

If you remember they already wanted to impose it in our countries a few years ago.  It was officially manufactured by Motorola in 2000, and already in the northern hemisphere, it’s used by all companies. But they’re two different things: the microchip for the information and the nanoprocessor driven by the 5G antennas.

Diana Patricia Schroeder: Doctor, another question.  A colleague did a test with wifi.  He was in a shopping mall, and codes came up when he put the phone directly on the vaccinated person.  Codes appeared.

Chinda Brandolino: That’s correct. It’s just like that.  I did the experiment with some inoculated family members of my patients.  If you activate the Bluetooth option, which searches for devices, PUT IT ON THE ARM OF THE VACCINATED PERSON, YOU’LL GET A CODE OF ABOUT 10 DIGITS.  It’s always the same for that person.  And if you put it on the other arm, that code appears again.  I think that is the number of the nanoprocessor that was inoculated with the vaccine.

Chinda Brandolino: Of the nanoprocessor, of the person, YES.

(Next video, 8:59 min mark)  I saw all these video’s online, so I wanted to see how it works.  So I went to the park, to the fair, and also to a school near by.  I turned on the Bluetooth on my phone, I scanned for all the Bluetooth devices, all the vaccinated, in other words, ALL THE PEOPLE WHO TOOK THE MARK!  Their IPV6, INTERNET TRACKING ADDRESS came up!  During my findings I had to be extremly close to them for my phone to pick up their signal, EXCEPT WHEN I WAS AT THE SCHOOL, THERE WAS A 5G TOWER!  Which seems to be the REASON WHY I was able to pick up their signal, not having to be as close to them.  So YES, IT IS CONFIRMED….WE HAVE IRON MIXED WITH CLAY AMONG US, JUST LIKE AS IT IS WRITTEN IN THE BOOK DANIEL 2:39-43!

Next video, 10:16-13:34 min mark: Video in French?  Man walking in public place with his cell phone and bluetooth on to see if he can pick up the vaccinated.  His phone picks up all the 10 Digit ID Code’s of the vaccinated in the area that he is in.

Next video, 13:35-15:39 min mark: A lady in the park with her cell phone bluetooth turned on.  She picks up the 10 Digit ID of the  woman near her that was vaccinated.  She calls them POKEMANS!  POKEMANS around. Vaccinated are detectable!  She finds more as she walks around.

Leeland:  So there is something everybody can do when you are out in public, turn on your bluetooth and see if you see these numbers, and letters, these IP address come up!  THIS IS THE MARK OF THE BEAST!  THE MARK OF THE BEAST HAS THE NAME OF THE BEAST, WHICH IS IN THE VACCINE: LUCIFERASE!  And, there’s other things coming down the line potentially!  Okay?  The Luciferase in the  quantumn dot tattoo!

Many people say that it is not on their right hand!  Well, the people are being CONDITIONED with all of these booster shots and everything else, so once the next thing comes along, and they say: Oh, we can’t PROVE the vaccination because they are forging it, so now you got to take this stamp!  Well, now you got your stamp!   It’s going to have all of your vaccination records, bank information, it has the number of the Beast: 666, the Cryptocurrency System!  So guys, TRY THIS BLUETOOTH ENABLED VACCINE THING, it’s fasinating, see if you can get this to work! You know, let me know how it goes!  We’ll have more information and video’s on the fact that: YES,  THIS IS THE MARK OF THE BEAST, AND IT IS A MICROCHIPPING OF THE PEOPLE!

Thanks for watching, God bless you! ~ Leeland Jones

Coronavirus Vaccine is Mark of the Beast: https://rumble.com/veh0pl-coronavirus-vaccine-is-mark-of-the-beast.html