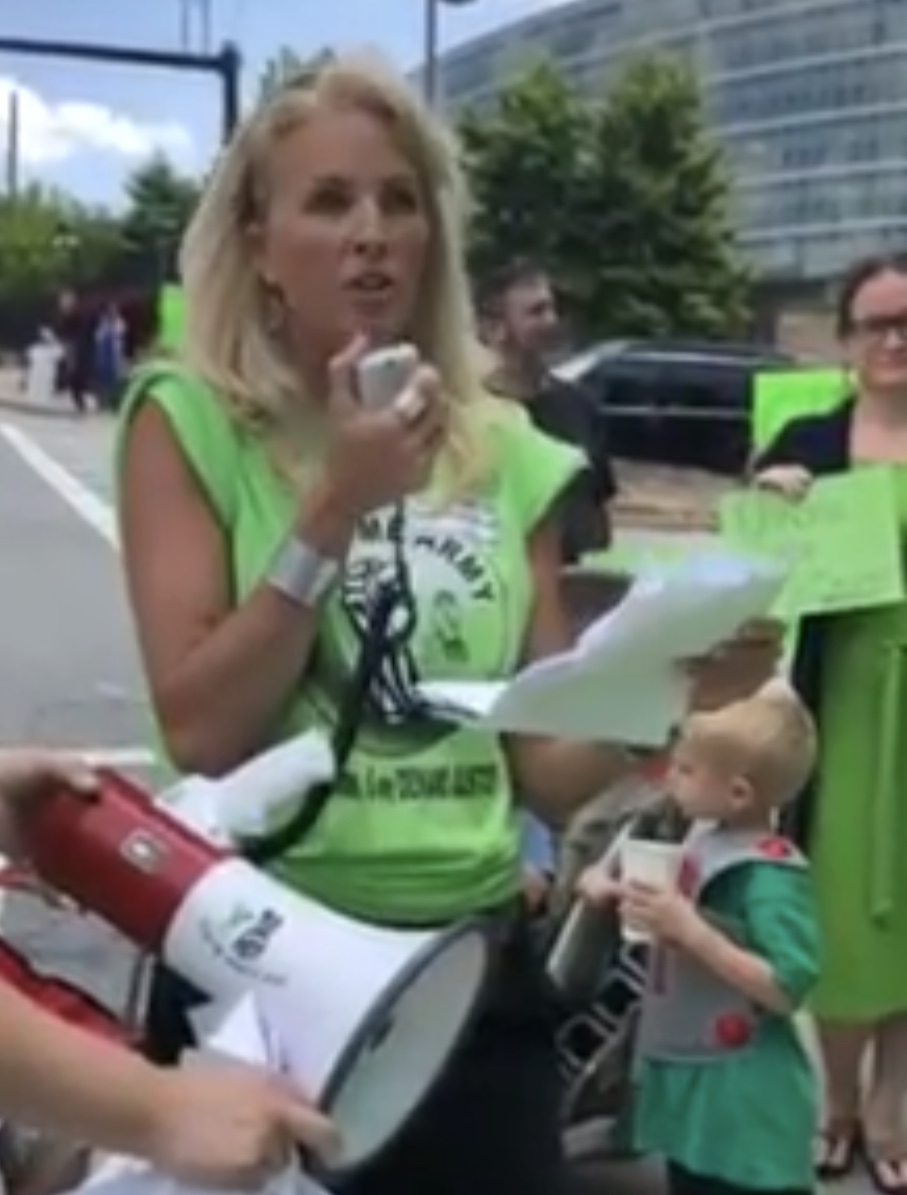 “Facts do not cease to exist because they are ignored”.   ~~~Aldous Huxley

If you want to see who is really running our government, aka…the deep state players, study and prosecute the Lyme Crime.  The Lyme Crime shows why 1 out of 35 American Children are now being diagnosed with vaccine induced Autism, a disease that was unheard of before the militarization of vaccinations. https://www.cdc.gov/nchs/data/databriefs/db291.pdf

These deep state players are holding Americans and their family’s hostage by treating them like slaves, with no rights to decide what is injected into their bodies. By forcing children, veterans, and healthcare workers to get vaccinated if they want to attend school or keep their jobs is  submitting them to the Catholic Church standards of giving up their God given rights of trusting and using God’s instructions on how to heal the body. Instead, they are being forced in using man made methods that have been proven to harm their bodies and give them the disease that the vaccine was to prevent, making the vaccine NOT a vaccine, all for the so called “Common Good.” Go to my blog and read: False Flags: Vaccinations and the Common Good post on my website, OvercomingLymeDisease.com to see what I am talking about. https://overcominglymedisease.com/false-flag-vaccinations-and-the-common-good/

You don’t see doctors speaking out today at this Lyme/all abused medical groups/CDC Rally because they live in fear of the powers that be when they speak the truth.  If you don’t believe me, check out Chapter 9 in my book, “Overcoming Lyme Disease”, that describes and explains how holistic doctors or regular MD’s that have spoken out about the dangers of vaccines, big Pharma, cancer treatments, or those that explain the  benefits of alternative treatments that don’t use man-made medicines, why these Hero’s are mysteriously dying and the justice department is not looking into foul play.  Case in point, CDC officer, Timothy Cunningham that went missing and it took CNN 2 weeks to cover the story.  When CNN finally reported the story, they said Dr. Cunningham was upset for losing a promotion in which the CDC later publically spoke out and said he did not miss a promotion.  It was also reported that he left work sick on Feb. 12th, but went home and left his dog, keys, wallet, cell phone at home while he went for a jog or a walk near a river that he recently was discovered found dead and decayed in, with no further investigation into foul play. https://www.cnn.com/2018/02/27/health/missing-cdc-epidemiologist-update/index.html  https://www.cnn.com/2018/04/05/health/timothy-cunningham-cdc-body-found/index.html

How does this happen?  The truth will come out about these brave doctors.   Erin Elizabeth, from Health Nut News recently signed a contract with a Hollywood film producer to cover these stories of these brave dead doctors. https://www.healthnutnews.com/86th-doctor-found-dead-in-ga-river-cdc-atlanta-pd-give-conflicting-stories/

Another reason why you don’t see any doctors out here protesting is because they lack knowledge or the truth about Lyme disease.  The American Lyme Disease Foundation started in 1990 to spin the disease to the world calling it a bacterial infection when they knew it was far worse. (Action Lyme Cliff Notes, Lyme Crime) https://overcominglymedisease.com/resources/

The ALDF, CDC, IDSA, FDA members and anyone else they were in bed with, spun this disease to the world reporting it as a curable bacterial infection, instead of admitting it was a parasitic spirochete (its own Phylum) that sheds fungal antigens that perminately shut down the immune system. With no immune response, your body can’t recognize foreign invaders like EBV or any viruses they are  injecting via a needle, allowing those unchecked viruses to run wild on the body causing diseases like Autism.  This is, similar to AIDS, where HIV, a T-Cell Virus attacks the body.  The outcome of Lyme is, Cancer, ALS, Lupus, MS, Alziehmers, Parkinson’s and the likes.  Lyme mimics over 350+ diseases.

Even if doctors understood the mechanism of this disease, the testing is fraud.  Only 15% of the American population will test positive which is causing 85% of the population to be misdiagnosed and treated for diseases that Lyme only mimics, meaning they aren’t getting treatment for the disease they really have, a disease of immune suppression where by no means, can they ever receive a man-made vaccine.    This is a major Human Rights Violation!  It is not only a  crime against  Humanity, it is a crime  against the American tax payers that are being charged for testing and treatments that have been proven not to work.  Not only are the American tax payers being charged for these bogus test and treatments, it is costing the lives of our American people by  being misdiagnosed and inproperly treated for this systemic disease that is  similar to cancer and AIDS.

Since the Powers that Be have deemed AIDS the only disease allowed to be recognized as a disease of immune suppression, this crime is going unchecked.  The 1986 law that allows people to sue the American government because vaccine failure, these vaccine makers are no longer held accountable for any of their diabolical actions or vaccine outcomes. Did you know that 22 American Soldiers are committing suicide every day because of vaccine failure and exposure to biological weapons.  The #1 cause for death for a Lyme patient use to be a Stroke, now it is suicide because Lyme victims are told that they aren’t sick and that their symptoms must be all in their head.  Well, they are somewhat  right by saying Lyme victims symptoms are all in their head, they are suffering from a chronic brain infection, which is all in their head.  This medical and emotional abuse has to stop!  Suicide is NOT healthcare!   Suicide should not be the only option and treatment for Lyme, vaccine injured or other medically abused victims.

I guess, Hippocrates – founder of Medicine was right when he said, “If you are not your own doctor, you are a fool.”

So what do we need to do to get the recognition and help that we deserve?  Going to elected officials and sharing the crime has not worked thus far, probably because many of them are being paid off by big Pharma and vaccine makers. This is why We The American People who still trust in God and the laws that govern our Nation,  are here today to get this message out and heard about the Lyme Crime.

EPHESIANS 6:12 “For our struggle is not against flesh and blood, but against the authorities, against the powers of this dark world and against the spiritual forces of evil in the heavenly realms.”

Until we the people rise up against the powers that be, like David and Goliath, nothing will get done and we will continue to lose our fellow man to suicide  and everyone on this planet will continue to be abused by not getting properly treated. This is a major Human Rights Violation that is affecting our whole world. How does it affect the whole world do you ask? …our CDC sets the standard on how Lyme disease is to be treated and recognized along with pushing vaccines on the world, without properly testing them for immune suppression.

Together, we can get Lyme and other AIDS-like diseases recognized!

To Your Healing & Success,