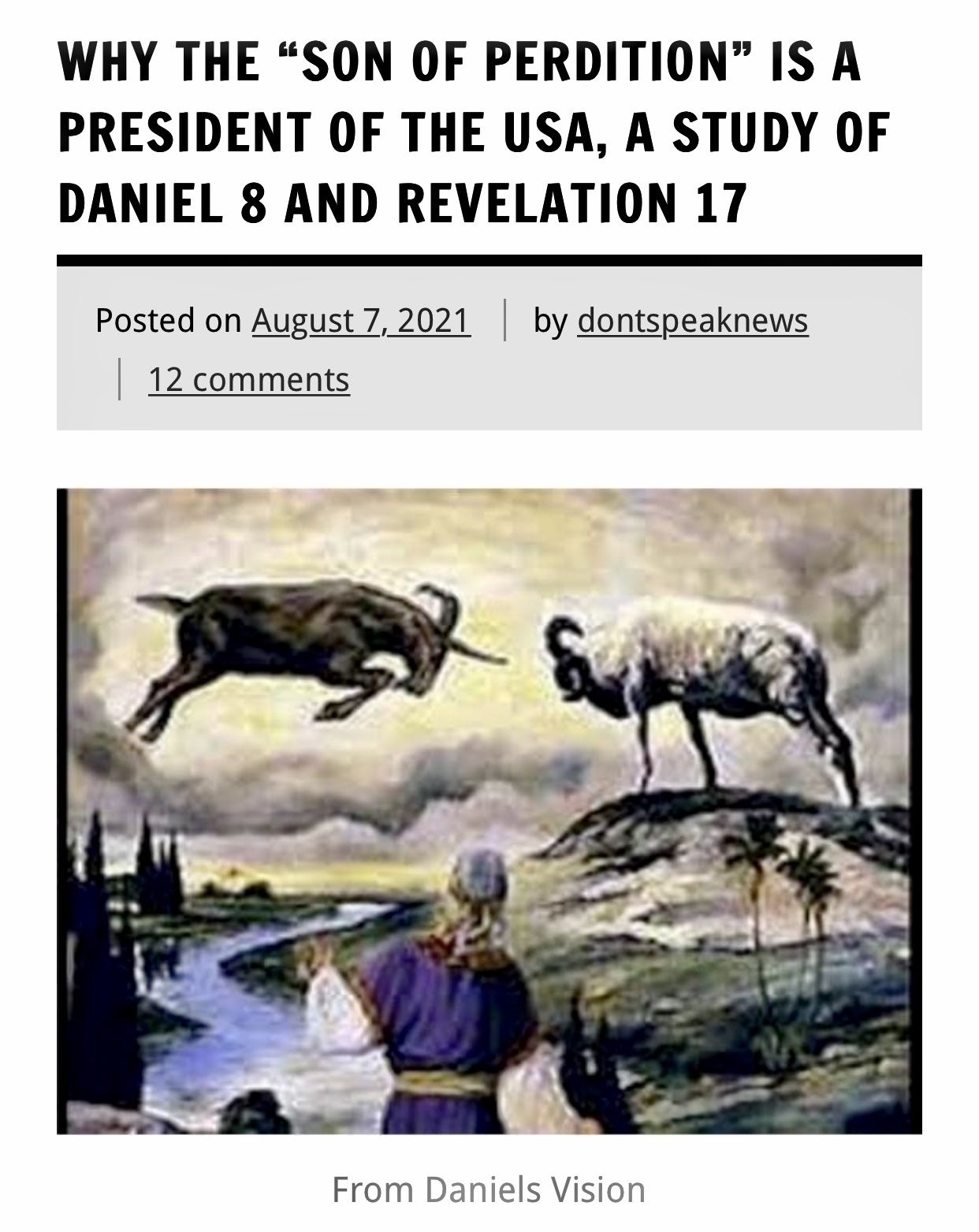 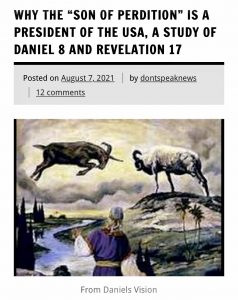 WHY THE “SON OF PERDITION” IS A PRESIDENT OF THE USA, A STUDY OF DANIEL 8 AND REVELATION 17, Leeland Jones Blog Post: https://dontspeaknews.com/2021/08/07/why-the-son-of-perdition-is-a-president-of-the-usa-a-study-of-daniel-8-and-revelation-17/

Today I’m sharing another Bible study from our brother Leeland Jones on the end times and the tribulation. This time the focus is on Daniel 8 and Revelation 17 as we study why the “son of perdition” has to be a President of the USA. It begins below.

I wanted to share with you the continuation on Dan 8, this time on why the Antichrist is also POTUS

Another part will follow on the fulfillment of wars described in prophecy.

¤ Next, let’s see why the Antichrist “little horn” is a US President:
Big picture is seen in Daniel 8 when, “The Ram which thou saw are the kings of Media and Persia. (Empire/Middle East)”
“And the śât‘îyr Goat is the king of Grecia” which “came from the WEST on the face of the whole earth, and touched not the ground.”

A common argument from the less informed is that the prophecies of Daniel 8 were fulfilled so there is no reason to concern ourselves with a future fulfillment. Daniel 8 clealy states that prophecy of major events most consider to happen during the 7 year tribulation like the “Daily Sacrifice”, “Host Trodden” or Armageddon and the “Abomination of Desolation” spoken by Christ: “When ye therefore shall see the abomination of desolation, spoken of by Daniel the prophet, stand in the holy place,” Obviously Christ is speaking of His Second Coming and Daniel says its “the end of days.”

Daniel sees a Ram and a “sat’yr” he-Goat and the angel Gabriel interprets them, “The Ram which thou sawest having two horns are the kings of Media and Persia. And the rough (devil) Goat is the king of Grecia.”

-Dan 8:21 continued “and the great horn that is between his eyes is the first king.” So this king as part of the Goat comes from the west to the east without touching the ground indicating an air invasion.
Dan 8:5 behold, an he goat came from the west on the face of the whole earth, and touched not the ground: and the goat had a notable horn between his eyes

Again, the notable horn here is the First king, very important as he’s the first of the seven kings in Rev 17:10 and he’s the mighty king.
-Dan 11:3:And a mighty king shall stand up, that shall rule with great dominion, and do according to his will. 4 And when he shall stand up, his kingdom shall be broken, and shall be divided toward the four winds of heaven

¤ Four Notable Ones – 4 Heads
Then we see what’s described as the 4 Notable Ones toward the 4 Winds which are also the 4 Heads as seen in….
-Dan 8:8 the great horn was broken; and for it came up four notable ones toward the four winds of heaven
-22 Now that being broken, whereas four stood up for it, four kingdoms shall stand up out of the nation,
These are the 4 Heads of the Leopard:
-Dan 7:6 Leopard, which had upon the back of it four wings of a fowl; the beast had also four heads; and dominion was given to it.
Again very important because in Rev 17:9 the seven heads are the seven kings v10 “and there are seven kings: five are fallen.” Therefore the first king plus the 4 add up to the “five are fallen.”

¤ little (miṣ‘îyrâh) horn
Out of one of the 4 Notable Ones “came forth a little horn,” Dan 8:9 This means that there’s a 6th in line = 1 + 4 + little horn. The sixth in the sequence of Rev 17 is called “one is” which comes before the seventh, again showing perfect agreement between Dan 8 and Rev 17.
We’d draw your attention to the Hebrew word in Dan 8:9 for “little” is miṣ‘îyrâh pronounced mits-tseh-ee-raw’ Feminine word meaning little, insignificant, a small thing. This is important because the same author in Daniel in chapter 7 uses a different word for little horn, ze‛êyr זעיר little, meaning to dwindle, be brought low, little one, be small.
Combine this with Rev 17 and we realize there are two fulfilling the role of “little horn,” the 6th AND the 8th son of perdition.

¤ Once we apply the succession of US Presidents starting with the “first great king” in Ronald Reagan, perfect alignment follows. In order for the prophecy to come to pass, there must also be wars which are seen in the US (Goat) from the Westbconflicts and invasions in the Middle Eastern areas of the former Medo-Persian Empire.

From the terms of Reagan in Afghanistan to Trump and all in between there’s been needless wars in Iraq, Syria, Lebanon, Lybia, Sudan, Somalia and Iran as “kings” of Persia. Certainty, the Goat from the West includes many countries but the only one benefiting is Israel. The type of goat is “shaggy” in the KJV which is a sat’yr in Hebrew, its a devil, hairy kid or goat known as a faun type devil or demon δαιμόνιον daimonion on Greek or even the Devil himself διάβολος diabolos.

Therefore, Israel and USA would have these wars in an Armageddon, west vs east fulfilling Daniel chapter 8 concluding with the final War of Israel and Iran the center of the former Persian Empire.
Since 9-11-01 look at this list:

Prophecy of Scripture fulfilled perfectly now, not in the future.

Let’s review.
◆ Rev 17:10 “And there are seven kings: five are fallen”
¤ Reagan, Bush, Clinton, Bush, Obama
‘and one is”, ¤ Obama also the 6th
“and the other is not yet come; and when he cometh, he must continue a short space.”
¤ This is the 7th Trump
“And the beast that was, and is not, even he is the eighth, and is of the seven, and goeth into perdition.”
¤ Beast that was and is not is the head wound in Rev 13 and goes into perdition revealed as the son of perdition which was Trump revealed Aug 2019.